Voyagers, a euphoric psychological thriller exploring the core of human nature in a vacuum, is available for viewing from 16 April in theatres.

The essence of this movie is clear when deep-diving into this genre-defining narrative. Euphoria is “the state of intense excitement and happiness”.

Further defined as a psychological thriller, the realness behind this movie will leave you with a though provoked mind. It’s clear that Voyagers is the philosophical translation of millennials living in 2021.

This film is written and produced by Neil Burger, who is also known for producing similar movies including Limitless and Divergent. Additionally, with the screenplay including famous faces like Colin Farrell and Lily-Rose Depp, this film leaves the viewer feeling stimulated and intrigued.

Colin Farrell plays the role of Richard who is a selfless scientist who has raised the group since birth.

“For Richard, I wanted somebody who possessed a powerful empathy, and with Colin Farrell, you just see all his feeling, his caring, his personal struggle, in his eyes,” says Burger. “He was perfect to play this figure who sacrifices his existence on earth for the future of these young people.”

What does it feel like to feel for the first time?

What happens after our long-suppressed nature is unleashed?

Why should we be good?

If we’re all going to die in the end anyway, what does it matter whether we’re “good” or not?

These are some of the provocative themes explored in Voyagers.

The story’s multi-generational mission in search of a new home descends into madness, as a group of extraordinary young people wakes up to their most primal state. Leaving them not knowing if the real threat they face is what’s outside the ship or who they’re becoming inside it.

As the story unfolds, the crew members uncover one of the mission’s most startling secrets: that they are unknowingly drugged with a medication called, “The Blue.” The crew had been told it was a vitamin supplement. But in reality, it serves to suppress their emotions, including anger, fear, and desire.

It’s a bold, experiential, and genre-defining motion picture event about living beyond the edge. It further explores the delicate balance between control and chaos, subservience and dominance, numb versus switched-on, and order versus rebellion.

Behind The Scenes With Neil Burger

Burger’s vision for the film was for everything to be based in reality. “Voyagers isn’t a fantasy,” he points out. “The spacecraft is purely utilitarian and functional and based on actual proposals within NASA and other organisations studying space travel outside our solar system.”

Burger and his team’s extensive research included a visit to SpaceX, which inspired the stripped-down environment of the film’s spacecraft.

“The ship is a sterile environment where the young crew almost seem like laboratory rats. We watch to see how they behave under these conditions, how they quickly descend into savagery. And we wonder, is this who we are at our core?”

Burger and Production Designer, Scott Chambliss’s key pre-production discussions were that there should be nothing extraneous on the ship. Just enough supplies, food, fuel, to sustain the life of the 30 crewmembers—the bare minimum.

The ship design is just big enough to support them. Any extra weight, any extra room for leisure, for example, would make the ship too heavy to push through space. The intention was to create an environment built to sustain life on a voyage to the next planetary frontier.

These ambitious builds – labyrinthine combinations of lengthy, inter-connected corridors, living quarters, communal and functional spaces – were constructed to make the cast feel claustrophobic like they were experiencing interplanetary travel within a spaceship’s confined quarters.

These tight interiors were built to stoke the characters’ isolation, confinement and cabin fever.

From the inception scene, it is clear that Burger has created a world that’s visually striking. All of this while providing an opportunity to really dig in and put a magnifying glass to each of the characters.

Burger, Chambliss, and director of photography Enrique Chediak collaborated closely on how lighting could be used to convey specific moods, emotions, and times of day within the predominantly white spaces. These were all windowless and devoid of natural light.

By embedding approximately 4.5 miles of dimmer-controllable LED lighting on the sets, Chediak had complete control of every light on board and could adjust them all with maximum speed and freedom.

“Then, the characters are starting to be stripped away in good and bad ways. Not only does the ship evolve, but the lighting evolves, whether it is bursts of colour on sets, the colours of the monitors, or the red lights and the blue lights of danger”, he continues.

How You Can Watch Voyagers?

Pre-book your tickets now for your next girls’ night or date night at either Nu Metro or Ster Kinekor.

Read more from our entertainment editors. 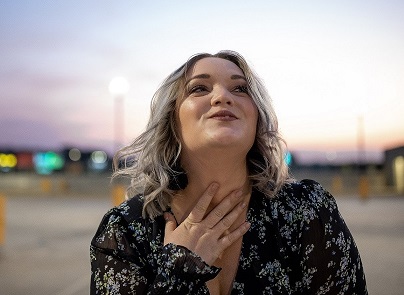 Natania Tesnar is a vibrant and spontaneous 28-year-old who aspires to motivate people to believe in themselves again. As a BCom Communications graduate, Natania channels her energy to grow as the ambitious woman she is. By day, she works as a Public Relations- & social media professional in the IT- and business sector; by night, she tries to take over the world with her relatable & storytelling blog and brand she is building, That Fat Girl. She practices self-love and self-care by doing things that truly make her happy: camping & hiking in nature, dressing up for occasions, trying to keep her plants alive, playing PC games with her fiancé, and by being a body-positive plus size queen.

Why Being Single Is The New Normal!

The Boob-job Do's And Don'ts