He made history when he became the first South African  to win the number one ranking on iTunes with his debut album, “The Home We Built.” Since then, there is no end to this songwriter’s success.

The singer and native of Cape Town’s music is described as unconventional where pop music and various instruments, including electronics, meet each other. Acoustic guitar, banjo’s, drums and percussion instruments are used regularly and he is known for interacting with his audience in performances.

His  single, Inside Out, from the album Run, was released in November 2017. Inside Out is his pink song since all his songs are linked to a color. Here the brilliant combination of drums and the piano is used. Mole knows exactly how to stimulate all the feelings of his fans, leading to the dedication and successful sales of his sought after merchandise series. Take a look at matthewmole.co.za or follow him on instagram where he regularly announces pop-up online stores. For sale, among other things, there are funky beanies, vinyls and doodle t-shirts. His brand slogan is, “Who the flip is Matthew Mole.”

Music to our ears

In 2012, Mole won the prestigious Converse “Get Out Of The Garage” competition that sparked his career and led to a contract with South Africa’s premier Independent label, Just Music. His debut album, The Home We Built, has quickly won Gold Status and its single, Take Yours, I’ll Take Mine, has reached Platinum.

In July 2016, Mole released his second album, Run. The album was No.1 on iTunes South Africa and reached Gold Status within three months of its launch. The song, Holding On, followed the track Run, and has picked up top position on the South African radio charts.

In Mole’s words: “My songs are inspired by my family and the people I love. They are my solid foundation and keep my feet flat on earth. We all have incredible talents and need to evaluate our value from a different perspective in order to reach our full potential. “The song, Run, is about tough decisions that each of us confronts daily. Most people’s first instinct is to run away from their problems, but if we look at the situation from a different point of view, things will work out as it is intended to be.”

The song Light was dedicated to all of Mole’s followers to show his gratitude. In his own words: “We sometimes think we can do everything ourselves and in our own way. Humility can bring you very far. ”

Mole’s music is world-class. He performed at the famous Hammersmith Apollo venue in London where the various music legends such as David Bowie, Queen and The Beatles have performed.

Mole definitely has the “It” factor with his eclectic music style, his happy go lucky attitude, comfortable sense of humor and indie fashion style that fans have gone on. His main purpose with his music is to make people happy. 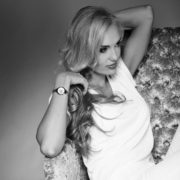 Anrike van der Walt has the heart of an adventurer and enjoys having an active life, doing Crossfit and is often on the lookout for new adventure. She was crowned as a Mrs. South Africa finalist in 2017, is a GAPA cover model and has a wide range of experience in the media industry. She obtained her BA Honours degree in Communication and Graphic Design at the North-West University and is currently busy with her studies in personal training.

Lea Vivier - Everything or Nothing