Before testing this car I wasn’t sure why Mercedes-Benz even bothered bringing out a sedan version of their very popular A-Class hatchback. I couldn’t decide if it made any sense, especially considering that globally, and very much so in South Africa, we have seen the increasing popularity of crossover and SUV vehicles under buyers. So why a small-ish sedan? At first glance it can be easy to confuse the A-Class sedan with the CLA. Both cars share a resemblance in overall shape, but that’s about it – a quick look at the taillights and you’ll know which one you’re looking at.

If you are a Mercedes-Benz fan, you will think the A-Class sedan looks really good. If you’re not a fan, you will probably still think that it looks really good, because it does! Especially the AMG-line, with a diamond-style grille, sporty front and rear bumpers and 18-inch 5-twin-spoke alloy wheels. The arrow-shaped LED daytime running lights point forward adding to the overall sporty design. The inside of the A-Class sedan feels modern and refined. The first thing I noticed when I got into the car was the three jet engine shaped air vents and the huge screen that stretches from in front of the driver to the middle of the dashboard – both made me excited. Being a luxury sedan, the quality of the interior is satisfying – a combination of leather, metal and (good) plastics come together to create an executive feeling, without being too grown-up.

The inside feels quite spacious too and backseat passengers have decent legroom and comfortable seats for those long drives. The backseats also has ISOFIX points. Moms, maybe time for a new car? I think yes!

If you are buying the sedan, one of the reasons is probably for the extra boot space, which you get 420-litres of – not bad at all! 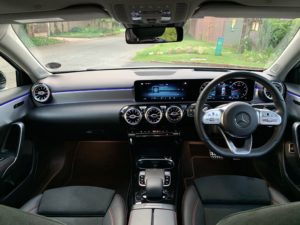 The A200 sedan has a 1.3-litre turbocharged petrol engine that produces 120Kw and 250Nm and is mated to a 7-speed automatic transmission. Fuel consumption is claimed around 5.4l/100km. I was using the car to run around town mostly, so my consumption was a bit higher at around 9l/100km, which is not too bad.

The engine is nippy, fast and fun! You always have power to play with, and with a top speed claimed at 230 Km/h it is pretty quick as well!

The ride is comfortable and feels refined with a nice hum coming from the engine. The AMG-line does have a slightly firmer suspension, which made me quite aware of some bumps and dips in the road, but it didn’t bother me too much. 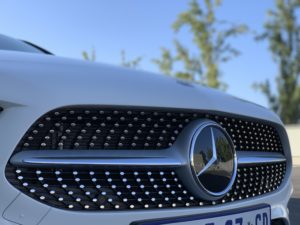 Mercedes-Benz is known for having a wide range of optional extras to choose from. Some are conveniently grouped in packages, which makes choices easier, but it can be pretty pricey. My test car had quite a few of these extras. Here are some of my favourites:

Panoramic sliding sunroof (R15 200) – A full glass roof can never be a bad thing – it makes the car feel more spacious and lets in natural light. A touch of a button, or a quick voice command, closes the sunroof with a thin roller blind.

Ambient lighting (R3000) – This is becoming more popular in new cars and I love it! This extra adds lighting strips on the dash, door panels and in the air vents. You can mix and match between 64-different colours to create some cool combinations.

All-digital instrument display (R6500) & 10.25-inch display (R10 000) – This is that huge screen I was talking about earlier. Although it is a pricey extra, I think it’s worth it. The instrument display was definitely something that stood out for me from the start. Not only does it look great, it is also really nice to use. 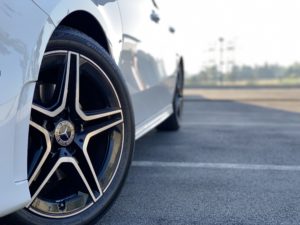 Apart from the growing popularity of SUV and crossover vehicles (in South Africa), there is also a buying-down trend. This means that people who can’t afford the fancy cars they usually drive are now “downgrading” to cars that are less expensive. So, a C-Class owner might downgrade to a CLA or A-Class sedan for their next car.

The A-Class sedan is a clever move from Mercedes-Benz to keep their costumers who might be looking for a more affordable car without having to compromise on quality and luxury. Own Your Space In Any Lane? Consider The BMW M135i

What Do Millennials Look For In A Car?