Bokang Montjane-Tshabalala on her transformation from being Miss South Africa to becoming a mother and the whole process of her metamorphosis.

She walked onto the patio on the day of the first-ever BLOSS Africa cover shoot dressed in all black and heels, and a certain finesse. Fierce. With confidence and without knowing anyone, she called, “Hello, everyone,” and started greeting the team. She was at ease, and so were we, thanks to her easy-going attitude. She is tall, strikingly beautiful and oh so elegant. Her afro lends a certain power to her already statuesque appearance, and her low and husky tone of voice a sense of mystery.

Bokang Montjane-Tshabalala, former Miss South Africa, current businesswoman, philanthropist, wife and mother, and now also the first-ever BLOSS Africa cover girl, graced us with her time and her mesmerising beauty. Looking at her, and listening to her one understands why she won the most sought-after title in the country in 2010; it’s like an a-ha moment.

As a little girl, she always liked to dress up. In high school, she did the jeans and sneakers thing like most of us, but anyone who went to university with her has only ever seen her in high heels. “I was told, if you want to be a businesswoman you better dress like one, speak like one and act like one before you even become it. So, I had this idea that if I was going to be Miss South Africa, I was going to dress and act like one.”
Miss South Africa gave her a bigger platform than she could’ve ever hoped for, she says. It opened many doors in the business world. “In terms of transformation, I have definitely grown in business. I’ve taken more chances. I’ve become even more of a go-getter than before the competition.” We evolve continuously, and Bokang believes that everything boils down to working extremely hard. She has matured, and she is more focused. She is not the same person anymore. It has been nine years since she was crowned. A person can change a lot in nine years.

Outside of her box

The first time that Bokang can remember ever climbing outside her box was when she was about fifteen years old. It was on youth night, a Friday night, at their church, and the theme for the evening was I’d rather stand out than blend in. “That day literally changed my life forever. I think for the first time as a young girl I understood that I don’t have to fit in with anybody else; and actually, I don’t want to fit in.” 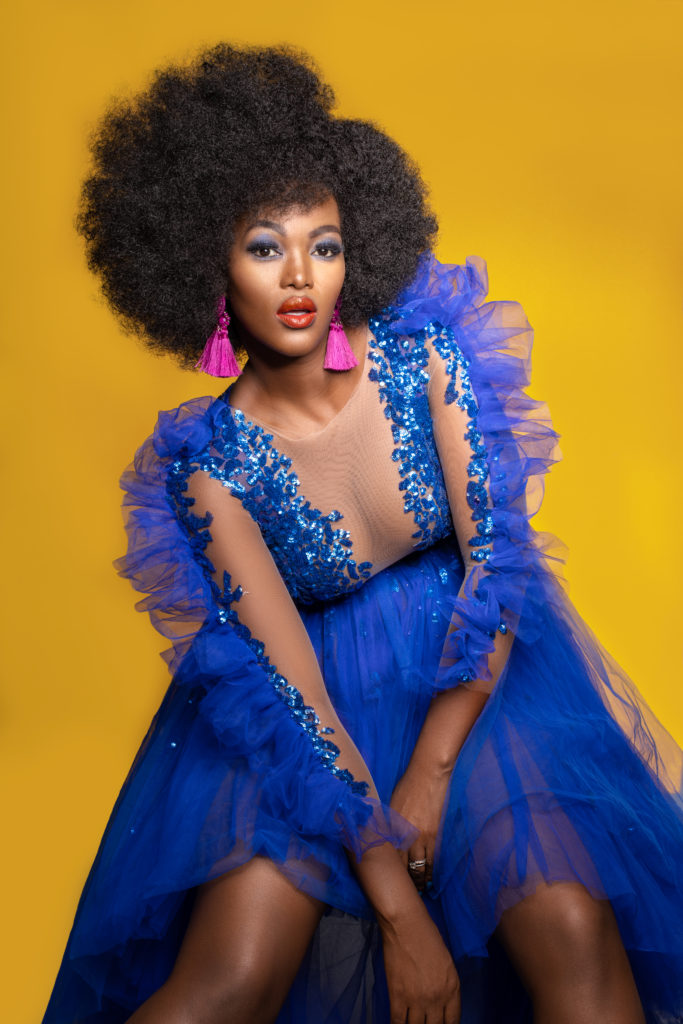 Motherhood has changed her

Even though she describes herself as always having been an elegant and sophisticated dresser, it has definitely changed since becoming a mom. Like any other mother, she has her jeans and oversized sweater days and flat shoes has also become more common. Current trends also have an influence on what she wears. “I am now at an age where I get to experience all the different styles. I have evolved as a person and in terms of style. More than anything, I try to be comfortable in what I am wearing.” She believes that if you feel good in the clothes you wear, you will automatically look good too.

Being a mom, she laughs, has made her appreciate her own mother so much more than she did as a young girl growing up. “I have never experienced anything as beautiful as becoming a mom; it’s such a beautiful responsibility to have.” She knows that there are a lot of moms out there but knowing that she created something so perfect, she can’t help feeling a bit like a super-human. “You push harder. All of a sudden it’s not just about you. You want to be a success because your success will determine the kind of life and the standard of living that your child will have.”

Her son has become her biggest motivation on the days that she struggles to get out of bed. Now, more than ever, she is aware of the fact that her son is probably watching how she reacts to everything; something she has also learned from a young age. We learn by watching. “It keeps me on my toes,” she laughs, but remains serious, “He will learn whatever it is I am portraying.”

One of Bokang’s big passions are children and the youth. She believes that it is extremely important to instill confidence and self-belief in young kids. “Starting the clothing ranges, both mine and my husband’s, and the black doll, was very important because I wanted African children to be able to see themselves on the clothes they wear and the toys they play with.” She wants every single boy and girl to feel represented, inspire hope and prove that you are not defined by your skin colour or where you come from. Her purpose in this life, she believes, is to give hope and help people believe in themselves. Everyone is worthy of big dreams.

I have always dared to be different, to step outside the box. 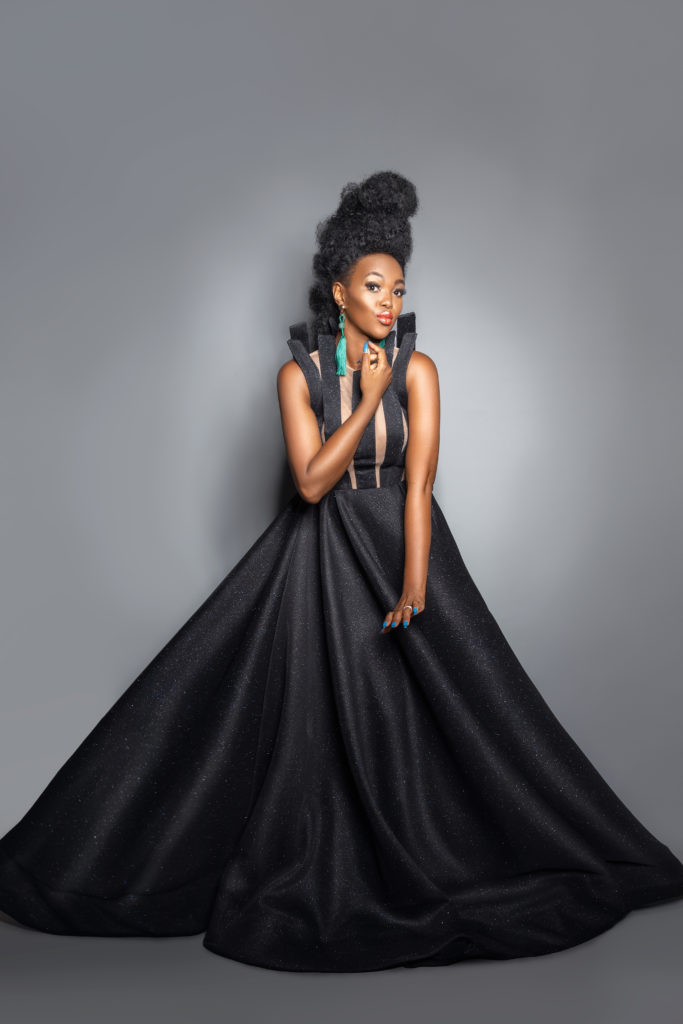 Obviously, we just had to ask if she has heard that she and Naomi Campbell looks so much alike, and we are not the only ones that had the thought it seems. I can tell by her chuckle. And then we move on to her hair. “I definitely use my hair to transform myself. Hair is extremely important to African women. The beauty of being an African girl is that you can change your hair every single day, week or month.” I couldn’t help but think of the famous Coco Chanel saying: a woman who changes her hair is about to change her life. I think most women can agree with this.

She has become very comfortable with a more natural look and has, therefore, become an advocate for a natural hairstyle. Not that she sees anything wrong with a straight weave. The trick is to find the thing that makes you feel most comfortable.

To reinvent herself, she makes time to just be by herself. It can be a hard thing to carry all of the titles most women do. At times you can lose yourself along the way. “I took a week off and just went to the mountains by myself. I’ve made a promise that I’ll do it quarterly, so we’ll see if I can keep to that commitment.” You have to constantly come back to yourself and just look at all of your plans and dreams and just do you.

This village girl from Mphahlele, Limpopo, has never let anything stand in the way of dreaming big and achieving everything that she has, and we don’t expect that to happen anytime soon. It doesn’t sound like she is even close to fulfilling half of her dreams. “Just to know, as a girl who grew up with no electricity, a girl who grew up in a village, to be where I am now is what inspires me.” However, she never lacked anything growing up, thanks to her parents who has always believed in her. The people who believe in her is her driving force. Failure is just not an option for this fierce woman.

She made an impact on everyone who were at the Bloss Africa shoot, that is just the type of woman she is. She just gives off an energy of success and passion.

Bokang is the definition of a queen owning her throne, and that is exactly why she is our first cover girl. Her horizons stretches further than most people can see, and we cannot wait to see what she does next. Õ

Breakup Survival Guide: All You Need to know!

0
Chrismarie Bester August 1, 2019
No Comments Yet

Conflict As an Opportunity For Growth

Weave It Up Or Wig It Out: The Pros and Cons